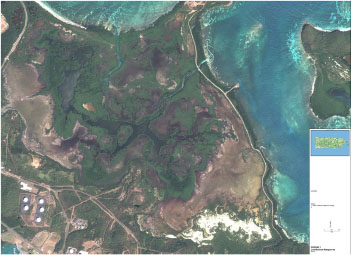 This project involved the restoration of hydrology to a 1,200 acre mangrove basin at the U.S. Naval Facility, Puerto Rico (formerly referred to as U.S. Naval Station Roosevelt Roads [NSRR]). Historically, the Basin had three primary tidal connections but in the 1940s, the southern-most connection was severed completely during construction of NSRR. The hydrological restoration was accomplished through enhancement dredging that was designed to minimize impacts to existing resources and to maximize tidal sea water flushing potential. The dredging concepts were modeled using a two-dimensional, depth-averaged hydrodynamic model, and to predict the tidal mixing between the Los Machos mangrove wetland and the adjacent nearshore area. Results of hydrodynamic modeling were used to quantify the flushing characteristics of the site both before and after dredging of a second inlet channel.

To evaluate the success of the hydrological restoration, selected criteria were monitored over a 5-year period. The primary performance criterion is the reduction of interstitial salinity throughout the Los Machos Basin. Vegetative recovery throughout the site is another important criterion, providing several indicators of success. Specific vegetative monitoring criteria include colonization rates, changes in percent cover, and new recruit survivability. Overall mangrove acreage throughout the site was also monitored through the use of geographic information system (GIS) analysis of color infrared photographs. Finally, hydraulic modeling was conducted to delineate tidal flushing improvements.